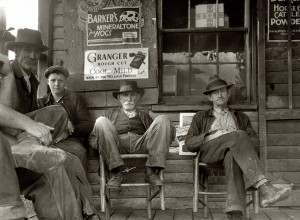 Few photos disturb me more than those of contemporary Appalachian poverty.

I grew up mixing with it every day:  miners’ kids, a beloved mother’s helper, girls from the Belmont County Children’s Home or boys with whom I played football and baseball.  But, there is something wrong with many, if not most, pictures of it today.

A fine contemporary photographer who has documented his part of the American borderland for years, I can attest to truths in his pictures.  I don’t know his subjects.  I did know many like them who would have posed in settings just like Adams’.

But I sense in Adams’ 17 shots in the Times a deliberate depiction of the timelessness of the poverty that came with the emigrants from the ‘Bloody Borders’ of England and Scotland to ‘Bloody Harlan’.  Apart from minor details – the age of the cars, the tattoos, the absence of cigarettes – the great Depression photographers could have taken these pictures.

That’s not right or accurate.

The sensation of permanence, continuity, we impose from our knowledge of Walker Evans [1] and Arthur Rothstein’s [2] Farm Security Administration images.  Adams evokes them by using dull black & white (like the standard issue newspaper film, Kodak Plus-X and Tri-X) and by the same careful composition his great predecessors used.

Against all evidence, Adams’ pictures assert the timelessness – and hence hopelessness – of rural poverty in the eternal hills of Appalachia.  But it’s not so.  Life in the Appalachians is profoundly different today than it was 75 years ago.

Consider just the absence of subsistence farming today in the Appalachians.  Millions lived on farms now marked only by cellar holes and trash dumps enveloped in leafy woods 70 years old.  Two generations have passed since the road side of a barn has had ‘Chew Mail Pouch’ painted white on black.  The jobs where men could spit tobacco juice have disappeared.

Many crossroads hamlets have died.  Only the collapsing one-room stores with ‘Salada Tea’ stenciled in gold on their time-darkened windows testify to the social scenes Evans and Rothstein capture.

Inadvertently I think, Adams captures the emptiness, the alienation that is today’s Kentucky, West Virginia and the southern third of Ohio and Indiana.  In my youth, we joked about ‘the three Rs in West Virginia: readin’, writin’ and the road to Akron.’

The truth concealed in Adams’ fine images is that most of those who could leave did, whether out of necessity or the aspiration for a better life.  What became of them presents one of the great social and political challenges of our time.

Back in the Appalachians and the plateaus either side of them, the remnant lives an American life of television, Wal-Mart clothes and obesity-inducing foods, something color images capture without the interfering references to Ben Shahn, Dorothea Lange [3], Walker Evans and Arthur Rothstein.

It is a dynamic life in rich color, and a poor, sad and dangerous one.  This Shelby Lee Adams’ fine pictures denies.

1.  I didn’t link to Walker’s well-known work in the south but to a fascinating site with an extended discussion of a series Walker did in New York City where he lived.  If you have the slightest interest in photography, New York, the Thirties….

2.  The Rothstein site has some fine shots.  Note especially the bottom third of the school room shot.  I remember my shock in first and second grades (1951-53) seeing farm kids come to school barefoot.  I never saw it again.

3.  The Lange link is to a page on the same site as the Walker link.  A really remarkable effort.