Change for the Famous Dead: What Gives? 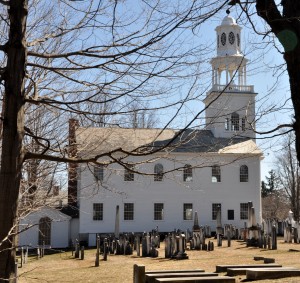 What do Jack Benny, John D. Rockefeller and Robert Frost have in common?

Each achieved greatness in a fiercely competitive field.  Each was born in the 19th century.  Each lived to a great age.  Each died still on top.  Each rests in a relatively unpretentious, but distinctive, grave in a uniquely beautiful cemetery.

Beyond that, I can’t come up with anything they have in common.  Except this: Visitors have littered each of their graves with coins.

When I saw change along the side of Jack and Mary Benny’s mausoleum, I thought they were an inappropriate, but fond, recognition of Jack’s famous skinflint role.  The mess seemed especially jarring in the meticulous modern setting of Hillside Cemetery in Los Angeles.

Eighteen months later, on Memorial Day weekend 2010, I passed John D. Rockefeller’s grave in Lake View Cemetery which refers to itself as ‘Cleveland’s Outdoor Museum and Arboretum’.  (I would insert before ‘Outdoor’ ‘Stunning, Moving’.)  At the base of Rockefeller’s obelisk was a litter of coins.

Ten months later on a cold, bright early spring afternoon, I visited Robert Frost’s family plot in a hillside graveyard in Bennington, Vermont, that dates to the Revolution.  In a fine short essay in the Dec. 22 New York Review of Books, April Bernard describes what I found:

A recent swing by his grave in the Old First Church cemetery, less than a mile from my house, turned up another bizarre feature of the afterlife of American poets. One is, of course, familiar with the custom of pebbles left on gravestones as a mark of respect or prayer—I believe that it was originally a feature of Eastern European Jewish mourning culture, but it has become more widespread in recent times. I was, however, unprepared for what greeted me adorning Frost’s flat marble marker, about the size of a single bed, engraved with his line “I had a lover’s quarrel with the world.” Instead of pebbles, recent visitors had left—pennies, nickels, and dimes. Quite possibly they had made wishes.

I have heard of coins placed on the eyes of the newly dead.  I’ve read about corpses buried with coins in their mouths to pay the boatman for their trip across the River Styx.  But coins on the graves of the famous?  I haven’t a clue what this hideous practise means.

Anyone have any ideas?

I don’t know when again I’ll have an opportunity to say ‘thank you’ to the staffs at the Hillside Cemetery in Culver City, California, and the Lake View Cemetery in Cleveland, Ohio.

These institutions could not be more different physically.  Apart from their purposes and beauty, it’s hard to come up with anything they have in common – except friendly, competent, helpful staff who cared deeply about their missions.

Thank you to all of them for making journeys of homage and mourning almost joyous.

Jack Benny posed all his career as a miser and a skinflint.  In reality he was generous.  He also famously billed himself as ‘Star of Stage, Screen & Radio’.  But beneath his name on his tomb are only these lines: