‘Youth and Beauty’ and the Cleveland Museum of Art

‘Youth and beauty’: That’s how we think of the American writers and artists of the 1920s.  The Fitzgeralds and Hemingway, the Flappers and Paris….

An exhibit running through Sept. 16 at the Cleveland Museum of Art, offers a corrective for this image.  That’s not to say uninteresting.  To the contrary, one comes away with a sense of life as it was lived, of unhappy young families at Maine retreats and the joy of being young in Manhattan.

The American painters and photographers it presents were young in the 1920s.  A few of the show’s offerings are familiar, its Hoppers and Bellows for instance.  Most aren’t, at least to me.

This fine review by Steven Litt in the Cleveland Plain Dealer captures the show’s essence.

The show is extraordinarily large and Litt omits mention of some works I thought extraordinary.

The Georgia O’Keefes are urban, very striking and unfamiliar.  Only in their extraordinary use of color do they hint at the southwestern paintings of sky and skull we know so well.

My favorite paintings in ‘Youth and Beauty’ are by Gerald Murphy, believed by many to be the model for Dick Diver in Tender is the Night.  Pictures of his few paintings I’ve found fascinating since reading Calvin Tomkins‘ biography of him, Living Well is the Best Revenge (1971).  The two Murphys in Cleveland have a depth the camera hasn’t captured.  They alone are worth the trip.

In thinking about the show, I was struck at how lightly it touched on the transformation of American life caused by Prohibition and World War I.  The ordinariness of much of the subject matter seems to deny the decade’s extraordinariness.

Cleveland is the last stop for ‘Youth and Beauty’ which was organised by the Brooklyn Museum.  It is not to be missed. 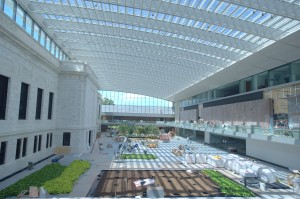 My recollection of the Museum was as a magnificent warehouse stuffed with so many marvels I felt giddy after a couple of hours.

The contrast of my memory with today’s display of the permanent collection could not be more stark – in two senses of the word.  The galleries I visited – notably the Greek, Roman and Byzantine – hold few objects, giving each a distinct space.  Their presentation compels the visitor to see them in three dimensions.

As if to emphasise the curators insistence visitors focus on each piece, the museum welcomes cameras in its permanent collection.  A view finder reveals the curators’ art.

While in Cleveland, I heard complaints about the new displays’ lighting.  Too dark.  That was not my impression.  Though my camera’s light meter indicated the rooms were dim, I thought the objects very well lit.  The Roman busts seemed alive.

Most labeling of objects was spare, often exasperatingly so as to provenance, context and dating.  Some labels on their wonderful kraters were misplaced.

While in the galleries, I loved the experience.  Only afterwards have I felt dissatisfied.  No matter how exquisitely presented, a relative handful of objects cannot reflect, say, the 1100 years of Byzantine art the way the old warehouses did.

But then, there’s the Rodin Room.  Natural light from two glass walls seems to bounce off the light wood floors and give immense weight to the bronzes.  The sunlight makes the figures seem to strain against their utter blackness, their bleakness toward the light.

Now an experience not to be forgotten, the Cleveland Museum of Art will likely be more impressive in future.