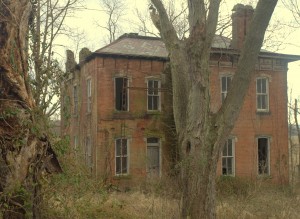 I’ve found few people credit my descriptions of the air pollution accepted as normal in the late 1940s and 1950s.  But Charles Dickens had described them in the aptly named – on several levels – Bleak House a hundred years before.

In my childhood, furnaces along the upper Ohio River system burnt coal and belched ash-laden soot.  Homes and steel mills alike relied on the coal that lay beneath them in neat, named and numbered strata.  At the mine mouths, gob piles – waste Pittsburgh No. 8 heaped 20-feet high – glowed from the fires within them, their pall hanging over the narrow, humid valleys.

The rare snow cover stayed white for moments, turning quickly into a mottle of black and gray.  The obligatory white shirts were gray by afternoon.

The fog didn’t ‘burn off’ until midday; sometimes in the November and December inversions, it never left.  Its unnatural cast and sting to the eyes and skin came from the sulfuric acid – among other things – the water droplets bore.  Drapes disintegrated in the washer.

People coughed.  When I was four, playing house with neighbors, I got to play the father because my deep hack sounded like all our fathers’.  Yes, many smoked.  But tobacco was only part of the story.

This morning, I ran across a quotation from the first three paragraphs of Charles Dickens’ Bleak House. [1]   Omitting the mud in the streets, he describes the coal days of my childhood 100 years after he wrote in 1852-53.

LONDON. Michaelmas Term lately over, and the Lord Chancellor sitting in Lincoln’s Inn Hall. Implacable November weather. As much mud in the streets as if the waters had but newly retired from the face of the earth….  Smoke lowering down from chimney-pots, making a soft black drizzle, with flakes of soot in it as big as full-grown snow-flakes — gone into mourning, one might imagine, for the death of the sun….

Fog everywhere. Fog up the river, where it flows among green aits and meadows; fog down the river, where it rolls defiled among the tiers of shipping and the waterside pollutions of a great (and dirty) city. Fog on the Essex marshes, fog on the Kentish heights. Fog creeping into the cabooses of collier-brigs; fog lying out on the yards, and hovering in the rigging of great ships; fog drooping on the gunwales of barges and small boats. Fog in the eyes and throats of ancient Greenwich pensioners, wheezing by the firesides of their wards; fog in the stem and bowl of the afternoon pipe of the wrathful skipper, down in his close cabin; fog cruelly pinching the toes and fingers of his shivering little ’prentice boy on deck. Chance people on the bridges peeping over the parapets into a nether sky of fog, with fog all round them, as if they were up in a balloon, and hanging in the misty clouds.

Gas [lights] looming through the fog in divers places in the streets, much as the sun may, from the spongey fields, be seen to loom by husbandman and ploughboy. Most of the shops lighted two hours before their time — as the gas seems to know, for it has a haggard and unwilling look.

‘Fog in the eyes and throats… wheezing by the firesides….’  How well I remember.  How well Dickens said it.

How critical to our children’s future is the War on Coal!  ‘Leave it in the ground!!