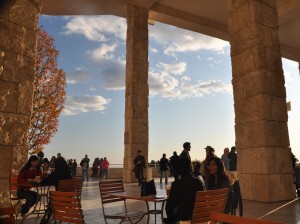 Fifteen years ago, few with power in Massachusetts exercised it with more relish and publicity than then Boston University president, John Silber.  As one wag put it, Silber was like life in Thomas Hobbes’s state of nature:  nasty, brutish and short. [1]

With Hurricane Irene bending the birches like bamboo and bursting the brook’s banks, Hobbes seemed the right writer for the moment – one who understood humanity’s darkest forces and lent his name to their summative adjective, ‘Hobbesian’.

Hobbes was born in 1588, just as William Shakespeare’s plays began to be produced.  He died in 1679 at an extraordinary age for the time, especially since he spent much of his life as a public intellectual and a polemicist when offense could mean a very unpleasant public death.

He survived the last war fought on English soil, the awful Civil War of 1642-51, and the violent restructurings that preceded and followed it.  Hobbes’s loyalties were complicated and gave him reason to worry about retribution from all sides to the end of his life.

Hobbes is remembered for Leviathan or the Matter, Forme and Power of a Commonwealth Ecclesiastical and Civil (1651). [2]  To be unjustly brief, it is a treatise on the nature of humanity and the necessity of government.  It had a vast influence on the course of the English Constitution and on the US Constitution, 140 years later.  It is worth reading today because it continues to echo in today’s politics. [3]

Like Adam Smith (as I’ve written here and here and here), Hobbes is regularly mis-cited and mis-quoted.  I perpetuated both in my first paragraph.

When Hobbes wrote of ‘the life of man’ in Leviathan, he was describing the human condition without government.  Note especially what he says about commerce:

Hereby it is manifest that during the time men live without a common power to keep them all in awe, they are in that condition which is called war; and such a war as is of every man against every man.  For war consisteth not in battle only, or the act of fighting, but in a tract of time, wherein the will to contend by battle is sufficiently known…. [S]o the nature of war consisteth not in actual fighting, but in the known disposition thereto during all the time there is no assurance to the contrary.  All other time is peace.

In short, without ‘a common power’ – a government or as Hobbes put it, a commonwealth – there can be no peace.  He continues:

Whatsoever therefore is consequent to a time of war, where every man is enemy to every man, the same is consequent to the time wherein men live without other security than what their own strength and their own invention shall furnish them….  In such condition there is no place for industry, because the fruit thereof is uncertain, and consequently, no culture of the earth; no navigation, nor use of the commodities that may be imported by sea; no commodious building;… no knowledge of the face of the earth; no account of time; no arts; no letters; no society; and which is worst of all, continual fear, and danger of violent death; and the life of man, solitary, poor, nasty, brutish, and short. [4]

Much of the American heritage of the importance of government came from the experience of the English Civil War and its retelling through Hobbes.  The successful rebels under Oliver Cromwell, briefly, replaced a kingdom with a ‘commonwealth’.  It reverberates today in the ‘commonwealths’ of Virginia, Pennsylvania and Massachusetts.

But you hear Hobbes – mis-cited, mis-quoted – most distinctly in today’s calls for limited government and social insurance ‘reform’.  Of what Hobbes says, more in my next post.

1.  I don’t know who said this, but I will happily give credit where it’s due for so accurate a bon mot.  I think it was Mike Barnacle.  One of his peers wrote: ‘John Silber is not everyone’s cup of castor oil….’  Scot Lehigh, “The Combative Complex Chieftain Named Silber,” Boston Globe, August 27, 2003, p. A23.

2.  Beware of the WikiPedia entry on Leviathan.  It is skewed sharply right, especially in its anachronistic description of Hobbes’s notion of the sovereign.  So is the entry on Hobbes which seems written by the same person.  A better read, on all counts, is the Stamford Encyclopedia of Philosophy.